So, the New York Academy of Art is doing a collaboration of sorts with (t)here Magazine, in that the magazine is going to dedicate an entire issue to the Academy and what they do with artists that they show in their magazine, is that they assign the artist a theme or subject on which the artwork will be based and, regardless of the result, it's going to show in the magazine. I thought it was pretty cool, when they were explaining to us, that there is no curating of the work, they just show everything that results from the work made.

So, I'm participating in this shebang and it went similar to what happened for Conexión Drácula, which is that residency that I did back in Panama. The people from the magazine had us choose in a lottery type of thing the theme that our work would be about, I got "consume". And I loved/love the shit out of that.

With the drawing that I did to represent "consume" I wanted to see part of what I feel when I really like somebody in that very serious sexy way. I wish that I could somehow ingest them, always have them in me and be a part of me, similar to when I consume food. Thoughts that I've had before with music, too, if I could somehow liquefy Nine Inch Nails and drink it or inject it into my veins.
Or how I want to be closer to that person, if I could bury my head deeper into their chest, hold them close and hard enough that I could melt into their body. If I could be inside them and them inside me at the same time. How that other person makes me feel so warm that I think I might catch on fire.
So the two people in the drawing are having that sort of ecstatic, physically impossible experience. Their fingers are beginning to sink into each other's bodies, the skin around the fingers ripple like water, he opens his mouth as if about to take a bite out of her face, he smushes his face against hers and her face also gets smushed. His eyes are closed and her eyes are half open, mouth half open, she's going to close her eyes soon and they're going to get lost, there's only going to be feelings and they will disappear.
I didn't concern myself too much to make them look "like a man" or "like a woman", in my mind, by default, it's a man and a woman even if both bodies are very muscular and dude like. The title for this entry is the words "love" and "lust" with the letters staggered and I kind of thought the title of the drawing would be the same, but when I titled the drawing, I just titled it "Consume". 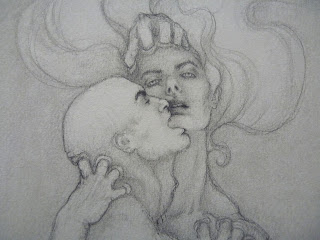 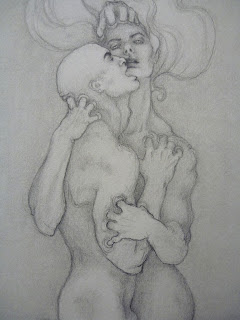