I drew from a picture that I found somewhere in the #balletfeet tag here in tumblr, with graphite over some very toothy cold press paper that was seriously ruining my life, because this drawing is so small and I found myself getting really fucking precious with it.
I drew for the duration of the third part of Dan Carlin’s Blueprint for Armageddon podcast, during which I cried by the way, which is almost four hours, then during the Welcome Oblivion album and then for maybe an hour more today. All this does not include the breaks.

I have a fascination with ballet feet, not so much ballet. Or maybe yes with ballet, I just wouldn’t go to a ballet show, I don’t think, that kind of really doesn’t appeal to me. I am fascinated by the way the feet develop with the ballet training and what they are capable of and how they become like mutant fucking monster feet. How when they curl their toes, the knuckles become so clear and it’s just like somebody clenching a fist, how long the fingers look and how fucked up they get, all knotty.
In my mind, “fucked up” and “monster” do not equate ugly or deformed. For me it’s the same as when I drool over hands that look like they DO shit, working fucked up strong hands.
The body responds when you make it do shit and what the ballet dancers can do with their feet just fucking blows my fucking shit away.
And the drawing is a man’s leg, which is all fine and dandy, but the girls going en pointe, their feet do some whole other shit. I read somewhere the boys go en pointe, too, but its scarce.
I find myself fascinated with everything, the exercises they do for strength of the toes, feet, ankles and legs, the way they prepare their pointe shoes, what they can do in the pointe shoes.

My reference picture, is this incredibly strange and hypnotizing picture of a male leg, barefoot and en pointe, with the toes curled under. I don’t know if they sprayed him with water or covered him in baby oil, but his calf is so strange. I guess the picture by default is phallic, but that medial head of the gastrocnemius makes me think of a penis. Also, that tendon that is sticking out and that cuts the entire picture almost right down the middle is mesmerizing, I think that's the Achilles Tendon, based on where it's going, but I had sure as shit never seen it go that far up the calf. I also know body parts get veiny with development and effort, but I don’t think I’d seen a veiny calf like that. Not that I can remember, anyway.
His skin is waxy looking and the grey background doesn’t help. And the hairs just make it more bizarre for me, although I have nothing against bodily hair.
So here you have both images. First my reference picture and then my drawing, which I titled "The Twinkle Toe". 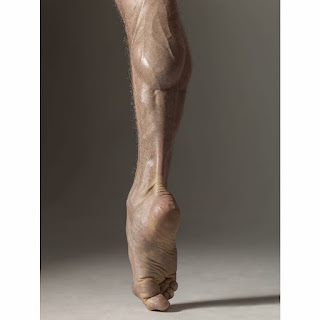 For the past five days, I've been making it a point to make a small, quick drawing on paper that I scavenged in my last days at the New York Academy of Art. Shit that people left behind when they moved out of their studios. Some of the paper has been cold press Fabriano Artistico and some of the other, I have no fucking clue. Both kinds are very toothy, not my usual cup of tea.
I have found it surprisingly enjoyable and I've been using it as therapy in a way, to remind myself that I can draw and that I'm ok at it.
I draw for not too long, maybe three hours at most, without including breaks and I've been drawing from pictures that I've saved over time (and I mean fucking years and months) specifically with the purpose of drawing from them at some point. It makes me feel good to draw something just for myself, and this was actually advice given to me by an artist that I seriously respect and admire, named Abhishek Singh, he told me he always says that to his students.

So, yeah, it's been going on for five days, I really enjoy it, I have plenty of material to draw on for now, to keep doing this very hedonistic and satisfactory thing.

I very much enjoy and have enjoyed it since I kind of discovered it at the Academy, this process where, instead of just drawing the image, I kind of look for it, whilst I draw. Actually, I would say that I learned this mostly through a classmate: Matthew Comeau. This guy just beats the shit out of the paper and I remember looking at him and just being hypnotized.
It took me having a shitty midterm critique, when the winter break started, going into the last semester for me to try something like that and that's when "Lipring" happened, which I think is the first drawing where I tried that process and it was incredibly liberating.

So, I try to emulate something like that in these drawings and almost whenever I start a drawing now, basically. The drawing now is more like a search and a study and I draw until I find what I want to see. Erasing, correcting and drawing again, it is an incredibly enjoyable process.
Come to think of it, I think Dan Thompson's drawing is also a similar endeavor, so he definitely deserves some cred, too.

The last drawing I did, which was yesterday, is a drawing of Trent. Here you can see my reference picture and then the drawing.
The drawings that I've been making, I haven't really been meaning to copy the picture, just have it as reference and take things from the picture that I like: composition, lighting, features. That's why the drawings are based off of the pictures. With this one, though, I kept going back and forth and I couldn't decide if I wanted to copy it or not, I mean, it's Trent, why the fuck wouldn't I want to draw him and his beautiful face. 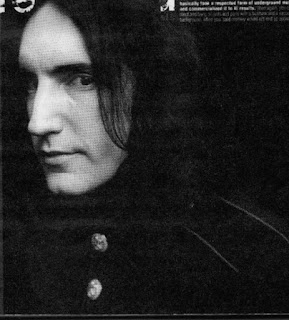 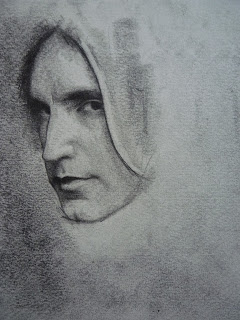 So, as you can see, my drawing is actually quite far from the picture, but I feel like it looks more "like" him than my reference.
And that stare and the facial expression in general, I like to think that's how he would look at me if I was drawing him in real life.
Or that it's the look I'd get before kissing him. Shy and serene. The drawing makes me think a lot of some pictures that I've seen of him and his wife that are taken very close to their faces and the pictures are very intimate, it's like my face is right in there with theirs and I can feel their warmth on my own skin.
These pictures ruin my life, obv.
They just resonate deeply, I guess. When I've been that close with a lover and I can smell his breath and we talk to each other with our heads really close, and I can feel his sandpaper skin versus the skin of the lips on my own face's skin and lips, and when you get close to kiss, their nose gets buried in your cheek. *SIGH*
So, the drawing makes me think all that shit and it makes me feel like this gif of Aladdin.

Posted by Gabriela Handal at 10:39 AM 0 comments

So, I drew this yesterday afternoon, whilst I listened to The Fragile, so it is about two hours of work and this does not include breaks, which were a lot.

The way that I’ve been working almost since I started at the Academy, is working 20 minutes and breaking 10 minutes. It’s based off of the Pomodoro method, although, as I understand, the breaks in the Pomodoro method are 5 minutes, but that’s not enough for me. I get fucking ridiculous amounts of work done this way.

I drew with graphite over some mystery paper that I scavenged at the Academy. It is way thick and toothy.

I used a picture of Milla Jovovich as my reference, it’s similar in the crop and composition, where the head is centered and cut at the top of the head and chin. It is ridiculously photoshopped, obviously. In this case, though, they completely changed Milla’s nose, they made it shorter, changed the tip to really straight and small. And I’m pretty sure they fucked with the ear that is in light, too, it looks like a cartoon ear.
The picture being so modified made me want to screw it up in my drawing, which I didn’t really screw up that much, but that person looks like a meth addict in comparison to the doll mask in my reference. I kind of really wanted to make hooded eyes and remark the upper and lower lids and their positions in reference to each other and placement in the face.
There is also some marking of the eye socket and cheekbone - zygomatic arch, some very slight frowning. It kinda looks like a snarl around the nose.
And I kinda wanted a more relaxed expression of the mouth, like when you stare off into space and the lips separate a bit. In my reference, she’s about to say something or in the middle of saying something. I remarked the node on the side of the lip that is in light and I tried to maintain that poutiness from Milla’s mouth, with the philtrum and sulcus under the lower lip.

Ditched the ears, because I don’t give a fuck about ears.

The end result, reminds me a freaking ton of Johnny Depp. With his tiny little mouth and pronounced cupid’s bow. There’s something in the pointy eyebrows and the stare and the sharpness of the features. 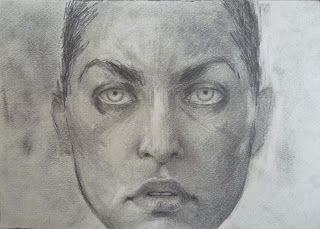 Sometime last year, I was commissioned to do a portrait of a girl and all the pictures I had as reference, which all happened to be selfies, just had nothing on her face. I don't know if there were filters, probably, but there was just nothing on her face and I was very annoyed drawing her, because there was just nothing there. It was like looking at pictures in any woman's magazine of your choice. Lately, whenever I happen to stumble upon one such magazine, it just SCREAMS at me.
Maybe it's because of all the anatomy I've learned and will continue to learn, on top of knowing that every single fucking picture is shamelessly photoshopped.
It makes me incredibly sad and depressed how many viewers and readers allow themselves to be fooled and we continue to fuel the photoshop industry by believing them and continue to buy their magazines.
I think I haven't bought that type of magazine in years and years.
And I love how they pretend to leave pores and the same pattern of skin fuzz or lines by using the clone tool (I think that's what it's called).
I want to draw and see faces with expression lines and cheekbones and wrinkles on the lips and eye sockets, frown lines, like that face has fucking BEEN THROUGH something in life, goddammit. Crying, laughing, thinking, wondering, yelling, anger, sadness and all that shit. Lately I have found myself really like the lines that are just outside the lips, I find them way sexy and I like seeing them on myself, too. And my frown, I fucking love my frown, the lines and the muscles.
Anyway, enough sucking my own dick and ranting.
Posted by Gabriela Handal at 10:56 AM 0 comments