I finished this painting maybe a month ago, it was part of some research work I was doing for what I thought would be my thesis.
Sometime last year I "awoke" from a lifetime of being a brainwashed woman. Before I got to New York, I was in a relationship of sorts with a guy that liked slapping and hair pulling in bed, which is fine, but I'm not into that shit and he kept doing it, even though I asked him not to and, for whatever reason that I just haven't figured out, I didn't defend myself when he would do it again and didn't say anything again.
He wouldn't do it every time we had sex, but I didn't know wether he'd do it or not.
I think part of not defending myself might have been fear of what would happen if I did defend myself, after all, it is said over and over again, that no matter what, men are always stronger than women. So is there even really a point to even try to defend myself?
So, I'm just blaming it on brainwashing.
There are many other things that I didn't like about having sex with this guy, he hardly ever kissed me and, when he did kiss me, I wasn't a fan of the way he kissed me either; there was hardly ever foreplay, so when he got his boner, he'd just put some spit on my cunt and penetrate me. And it was painful.
I have what I think is pretty good pain tolerance, I obviously have no gauge with which to measure, nobody does, but I like to think that I tolerate pain well enough. Pain usually makes me really angry, but whenever there was pain during sex, I felt like I was obligated to just take it. So I did the great majority of the time, with this dude and whatever other dude.
I had this image of myself that I thought I was supposed to be as a female, an idea that I thought I liked, a "temptress", "seductress", "always willing", impassive and insatiable witch.
And upon reading a book called "El Cuerpo en Venta" by Juan Carlos Pérez Gauli, all my shit was put in the fucking blender.
The book talks about the relationship between art and advertising and how the female body has been used in both throughout history. It also talks about how women and nature are put in relationship to each other, because they are both things that are mysterious to men and have so to be dominated by man. Or some shit like that, the book depressed the living fuck out me.
I don't remember everything, but it obligated me to reconsider a lot of things about myself that I thought to be true. So this dude that liked slapping and hair pulling and the things in the book, just put this idea in me and that shit snowballed and I wanted to make images that dealt with how I've been treated and how I'm still treated by men and others. I don't know who "others" are, but it's definitely not just the men. And it's also not all men. The whole sexism issue is something that affects everyone, but the research work was meant to help me convey how it feels for me. I can't speak for anyone else, now can I?
So, anyway.
I mean, I was aware of feminism and sexism, but I just didn't know how deep it went. To look at another human and see an object is all kinds of fucked up, it's absurd, but that's exactly what happens.
I read somewhere a comment full of hate about how women are seen as nothing but a hole in which men put their dicks. And I saw an illustration once, of a woman with a bull's head and she had the dotted lines of cuts of cow meat.
Why do we have to treat each other this way?
So, I made a painting of a vulva, titled "Storage Space" and this painting that you see here, titled "Modified Storage Space".
As usual, the work becomes more, sort of, as I work on it. And this painting started out with only the two cuts on the side of her mouth, as if somebody wanted to make her mouth open farther. I'm not sure if that would work, but clearly whoever is torturing her doesn't care.
Afterwards, it became that she had more scars on top of the scars of the cuts on the side of her mouth, her skin is also surprisingly good at healing, so her abuser kept hurting her.
Also, when I first started it, her lips were pretty relaxed, it could have been any mouth, party open, the person is distracted or something. But as I painted her more, she started looking like she's just about to grimace in pain or like she's just about to start crying again.
After a while of telling other people what I was working on, it kept feeling more and more like I was victimizing myself and trying to get pity from somebody, so I laid off all that shit and the work changed. So, I'll post about that some other time, but this is a little painting that I really like and I enjoyed painting it. I find it an incredibly beautiful image and I love the Dioxazine Purple with which I painted her and how the purple coming from the sides of her neck look like they're going to engulf her and the entire image and maybe that's why she's so afraid. 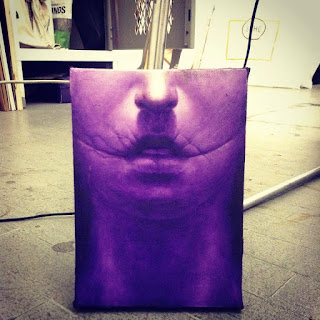 Posted by Gabriela Handal at 4:41 PM